March 17, 2015
I made some students very happy today by giving them probabilities to help them make their March Madness brackets.  FiveThirtyEight.com has an interactive bracket that was great for this Honors Algebra 2 lesson on probability.  After reading Jennifer Wilson's blog about #askdonttell lessons, I wanted to try it with the NCAA tournament.  The idea is that you give students a picture and have them come up with their own questions about the image, and then let them find answers to those questions.  Below I'll describe how I executed the lesson based on this lesson plan.

I had anticipated students would have the following questions:
-“What’s the probability that Kentucky wins?” (fill in the blank for any team)
-“Which team has the worst probability of winning?”
-“How is this determined?” Answer: http://fivethirtyeight.com/features/march-madness-predictions-2015-methodology/
-"What's the probability of picking a perfect bracket?"  Youtube video answer Students did ask the questions I predicted they would, and a lot of other great questions too.  I showed students the methodology for how these probabilities were calculated.  I then showed the short video for finding the number of possible brackets.  We then answered questions that had a quick answer ("Which team will win?").

As students were writing questions on the wall, I quickly decided which ones I thought students could answer with their background knowledge and the interactive bracket.  Some of these questions were complicated and in depth so I guided them by asking some questions I had made up before class.  We answered these questions together as a class.

-Why does the outcome of the Providence game not add to 1? (This is when I had a discussion about play-in games and why some teams in the bracket were grey instead of black.)

--What is the probability of Arkansas and UNC playing each other in the Sweet 16?


-What probabilities are complements of each other? 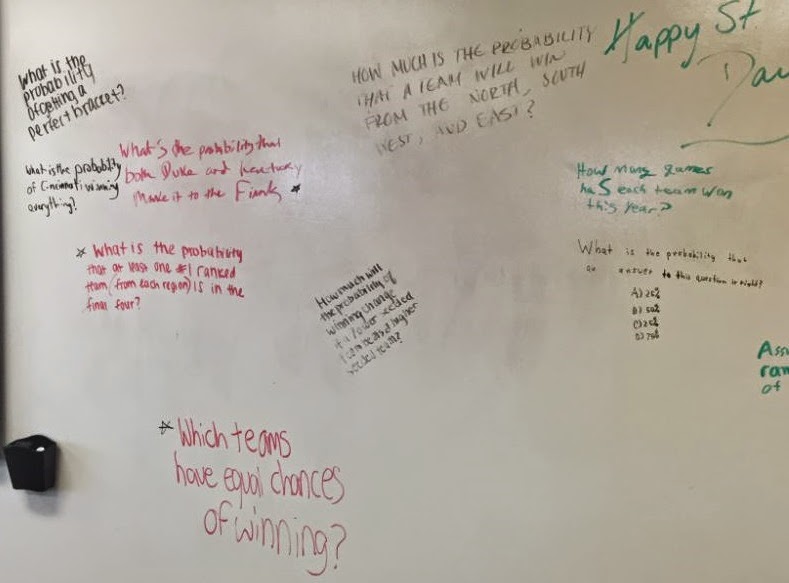 After answering my questions together, I starred 4-5 student questions on the board that I wanted us to answer. Students had to choose at least one of those questions to answer. They could use computers, phones, or the SmartBoard to look up any information that they wanted. It was really fun watching them work together to solve the questions they had written. As students were finishing, some of them started to compare their personal brackets they had made with the probabilities given on the interactive bracket. One cool thing that happened from this #askdonttell mentalitity, was that students kept asking new questions all period. Once they started asking questions, their creativity and interest continued to grow. Their continued questioning naturally led them to solve more problems too.

I asked students to tell the class how they answered the starred questions and what the answer was. If a different group solved the problem differently, we discussed that too. 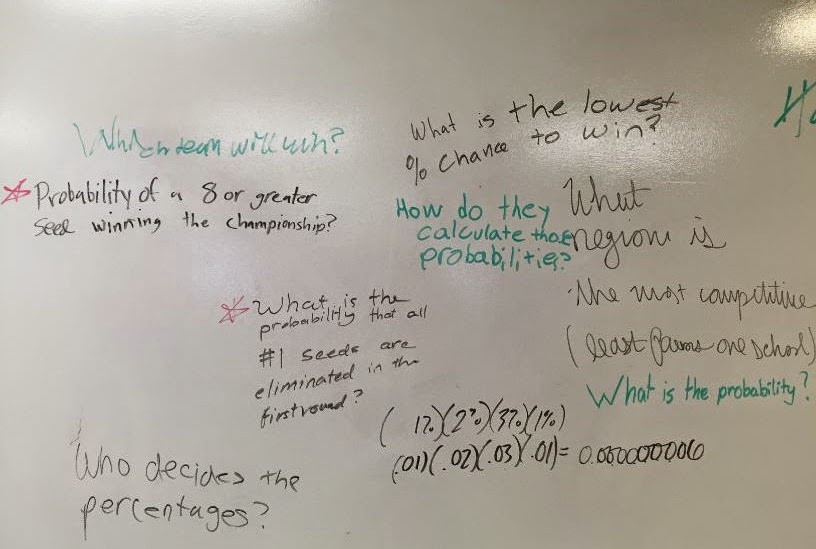 When I began the lesson, some students were nervous because they don't follow college basketball. I talked about how people make brackets based on all sorts of different reasons. Some are based on how teams did during the regular season, some people pick based on favorite colors or mascots, and others pick based on complicated mathematics. Once we started asking questions and answering them based on given probabilities, every student was engaged and their lack of knowledge of basketball wasn't a deterrent from participating.

I loved doing #askdonttell because students chose what we learned during the class period.  With some careful planning ahead of time, I was able to supplement their questions with ideas I wanted to make sure we covered.  They say two heads are better than one, and in this case the whole class was better than just one teacher in coming up with an engaging, interesting lesson.
Algebra 2 Ask Don't Tell Honors