January 06, 2016
On the first day of the semester I like to do an engaging math activity related to current events.  I do the same lesson in both Algebra 1 and Honors Algebra 2.  It gets students speaking math and asking questions.  The conversations vary between the two levels, but the activity can be easily adapted as an introductory lesson for any high school math class.

I found this interactive at fivethirtyeight.com that allows the user to compare frequently used words on Reddit. As I was playing around with it, I was excited to see that many of the graphs model linear, quadratic and exponential functions. Because of some inappropriate content on Reddit, and potentially in this interactive, I decided to make this activity all paper and pencil.  I had a few students help me pick common words/phrases for my list after they finished their 1st semester final. This is the handout I gave students.

The first step was to pick 4 out of 12 word comparisons that they wanted to know about.  Then they made predictions:  Which word is used more (on Reddit) today: Brah vs Bruh?  As I was listening to groups make predictions and share opinions, I overheard a student say "I'm curious about Lol vs Haha!"  I love that this lesson sparked curiosity.  That was a huge win. 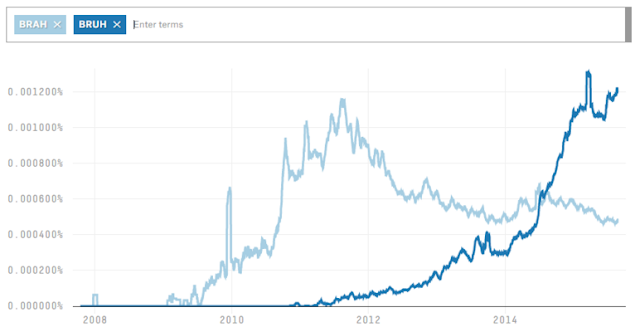 I had printed out the graphs of word comparisons and posted them around the classroom.  Students drew the graphs on their papers, decided what function modeled those words the best, decided which word increased more quickly between 2012 and 2014 and then predicted which word would be more popular in 2016.

Students had great conversations that were beyond answering the questions on the paper.  One student was wondering about all of the spikes on the iphone graph and his teammate concluded those must have been the release dates of new iphones.  I heard another group talking about the "average rate of change" as they were comparing two graphs.

As I listened to conversations, I reminded students what their variables represented.  I heard students disagreeing with the Facebook graph saying that Facebook is not more popular than Snapchat and Twitter.  We talked about how the graphs represent the frequency of the word on Reddit, not it's popularity among the general population.  So, some of the occurrences of Facebook might have been negative, against Facebook, not in support of Facebook.

I liked this activity because students were able to relate to the language that is used online today.  I appreciate that the graphs are jagged and imperfect.  Students had to interpret "real" graphs that didn't have "nice" numbers.  We were also able to debate which function best represents each graph.  It gave students a chance to justify their thinking.  One of my students asked "Are we going to have to do real math today?"  I followed up with a class discussion about how identifying an appropriate function, making predictions and analyzing graphs is real math. Every activity that I facilitate in class is purposeful with an emphasis on math more than anything else. I hope that more activities like this one can convince them that math isn't dry, but interesting and thought provoking.
Algebra 1 Algebra 2 Classroom Environment Differentiation Engaging Lessons