April 08, 2016
In Algebra 1, I taught a lesson that allowed for movement, student creativity, open-ended answers and error analysis all in one activity. The target for the day was to compare quadratic functions to the parent function.  To begin the lesson, we talked about the a, h and k values of vertex form.  They had played with these values on the previous night's assignment.  Then, I gave students a description of a quadratic function:


Students had to write a quadratic function in vertex form that satisfied these requirements. We graphed about 8 of the examples students came up with on Desmos.

When I thought that most of the misconceptions about the a, h and k values were addressed, I had students write their own description of a quadratic function on their desk.  After this, students got up, went to a new desk and were challenged to write a function that would satisfy the requirements of the desk they were at. Knowing that comparing quadratics in vertex form was a new topic, I anticipated that the equations they wrote might have some errors. I wanted to do an error analysis without students feeling defeated about the answers they put on a peer's desk. So I had them write a second equation of a parabola that they knew didn't satisfy the given requirements.  After this I had students return to their seat.  Back at their desks they had to work with the wrong equation first.  I had students "describe and correct the error."  They wrote out complete sentences about what was wrong with the equation.  After students were comfortable describing errors of an equation they knew was wrong, I had students check the equation that was supposed to match the description.  We used Desmos as a visual check to verify that the equation matched the description.  Because this was the first day of comparing functions, I anticipated that there were mistakes around the room.  Since students didn't know who had been at their desk, it was easy to talk about common mistakes with anonymity.  Common mistakes included forgetting the exponent on the quantity, incorrect "a" values for stretch/compress and wrong signs for the translations.
This was fun, students were engaged, and we accomplished the target.  This activity also allowed for me to get an informal understanding of what the class understands as a whole by taking pictures of their desks.  The work on the desk was the exit slip that helped me plan the next day's lesson. I definitely want to do this again.  Next time I will have students move to more desks throughout the classroom. 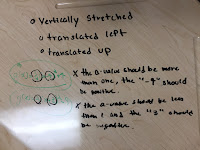 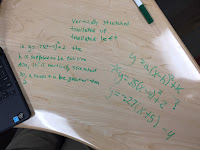 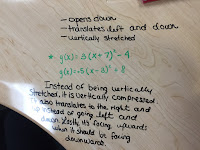 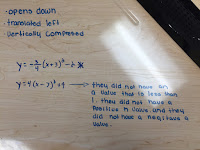