March 15, 2019
I've been having so much fun sharing Maths Venns with teachers.  I love doing Venns in class with students, but they don't smile and express as much joy as teachers do when they're working out a Venn.  Out of all of the types of math problems out there, I've found that math Venns generate the loudest conversations among students and adults.  I might be as bold to say that no type of activity allows for "critiquing the reasoning of others" like Math Venns do.  This activity lends itself to speaking your ideas out loud and critically listening to other's answers to give appropriate feedback. 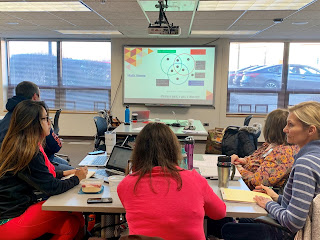 Recently I gave a presentation with Kathleen Williams at the West Suburban Math Institute Conference about Open Middle Problems.  We threw some Math Venns into the presentation as another example of deeper thinking.  The room was full of middle school teachers and a few high school teachers.  Even though this group of strangers didn't know each other, the volume in the room immediately got louder with the buzz of teachers discussing the problem we posed.

Last week Kathleen and I presented Math Venns to Pre Calc teachers in our district.  Teachers had to come up with graphs to fill in the regions "has a minimum point, does not cross the x-axis, and has a positive y-intercept."  The conversation began with quadratics and some teachers were thinking that some regions were impossible.  As time went on, teachers got more creative with their answers.  They started talking about trig graphs, circles, and rational functions.

The premise of the Math Venn is that you have to find an equation/graph/number that could fit in each of the 8 regions (of a 3 circle Venn) or 4 regions (of a 2 circle Venn).  Because the problem is open-ended, it's helpful to have a partner listening and checking your reasoning.  The great thing about being "wrong" about a particular answer fitting into a certain region is that you can often still use that answer somewhere else, you just need to find where it fits.

When I facilitate a Math Venn in my classroom, I have students work with peers to fill in each of the regions.  When the class is ready to go over the Venn, I randomly call on students by using note cards with their names on them.  I'll ask the student I call on to tell me their answer for any of the regions.  This is a pretty safe way for students participate since they've already worked with a buddy and have a choice of what answer they want to give. 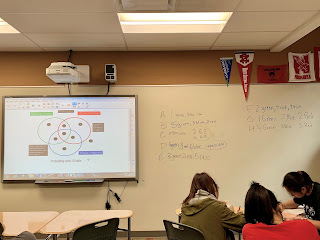 Another way I'll facilitate a Math Venn is by having small groups write the answer for one region anonymously on the wall.  Then students can check the work that's on the wall, and if they disagree, they can write what they believe to be a correct answer next to the work that's there.  As a class we decide which answer is correct.

I observed a teacher use Venns in an Algebra class related to linear equations.  She had students in groups and gave one sheet of paper per group with a two circle Venn.  Once students completed that one, they went on to do more complicated Venns.  The really fun thing that happened organically in her class was that students were filling in a region with multiple right answers.  We talked about how this would be a great way to differentiate for students who get done early by asking them to come up with multiple answers for a region.

I've heard the comment from teachers "This is great, but I don't have time to do anything like this in my class."  These are the same teachers who complain that students don't retain knowledge from year to year, or even chapter to chapter.  I would argue that we have to make time to do Maths Venns, Open Middle, and other types of problems that require higher order thinking in order to make the learning stick.

For more great info. on facilitating a Math Venn, check out the about section by Craig Barton, creator of the Maths Venns website.
Algebra 1 Differentiation Engagement Engaging Lessons